OK, so what does shutter speed mean?

You're comfortable making Photos, with your camera on Auto, and have even started using different settings for Aperture or Shutter on some photos. Now, you want to understand a bit more about how to get creative on some of your shots. Let's talk about Shutter Speed, and different effects on your photos.

What Is It About Waterfalls?

As a kid, I could not pass by running water. Whether it was a large fall or just some small trickle in the woods. I don't know what draws me to running water. I can watch and take pictures forever of waterfalls. 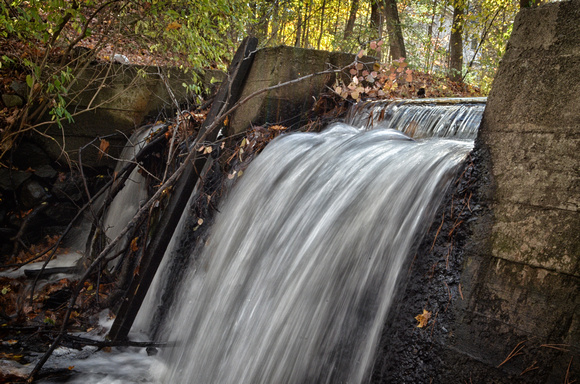 A slight, long exposure, so we can 'feel' the flowing water. In the photo above, I took the shot in Shutter Priority mode, meaning, I choose the Shutter Speed, and let the Camera think about Aperture. I set ISO to 800,  as I was under some cloud cover, and tree canopy. I also dialed in +1 EV.

Making any shot at under 1/60th of a second is difficult to do handheld. I set the camera on a tripod. Good, steady tripod. Also, this meant now I could take the photo with a few different settings and get the same framing. To get the water flowing, I set my Shutter to 1/13th of a second. Slow enough to get some blurring, but I still wanted some notion of water. Not silky smooth, like some flowing water photos. Usually, the slower you set the camera, the more silk or blur you will see in the water. too much and water looks unreal. Not enough and the water looks just out of focus.

And again, only at 1/3200 to stop the motion... The faster the shutter speed (big number) the less blur. So, for here, I wanted to catch water in midair!